Put SIDS worries to rest with the Snuza Hero monitoring your baby’s breathing. 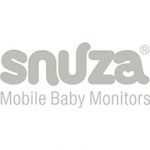 Sleep easy knowing that your baby is sleeping safe and sound.
The Snuza Hero (previously called the Snuza Halo – just the name has changed) is a mobile and easy-to-use movement monitor which clips onto your baby’s nappy to ensure that normal movement is maintained.
It will detect even the slightest movement and will alert you if your baby’s movements are very weak or fall to less than 8 movements per minute.
If no movement at all is detected for a period of 15 seconds, it will gently vibrate. Often this vibration is enough to rouse the baby, and it will revert to monitoring mode.
After three vibration/rouse incidents, the Rouse Warning will alert you to the fact that your baby’s movements have stopped for 15 seconds on three occasions.
If no further movement is detected for another 5 seconds, an alarm will sound to alert you.
The following features make the Snuza Hero a great product for your newborn
~ Small and easily portable (fits onto your baby’s nappy, no cords or large equipment)
~ Easy to use, switch it on and let it monitor
~ It can be used with co-sleeping twins and premature babies
~ The vibration stimulation helps avoid false alarms
~ An audible alarm sounds after 20 seconds at 85dbm at 10cm
~ The battery can be replaced, giving the product a longer life
Unit size L – 70mm W 45mm Depth 25mm
Weight 31g
FAQ

1. How does Hero differ from the Snuza Go!?
Hero has an additional vibration feature which causes the unit to vibrate gently after 15 seconds where no movement has been detected. This often serves to reassert the baby’s breathing, but if no further movement is detected, Hero emits an alarm. Snuza Go! will go directly to alarm mode after 15 seconds of no movement.

4. What exactly is the vibration on the Hero model for?
This is a proactive stimulator which attempts to rouse your baby after 15 seconds of no movement. Very often, if a baby is still for this long, a little tactile stimulation gets the movement going again. And of course, if it fails to rouse the baby, the alarm will sound after a total of 20 seconds of no movement.

5. Is Hero a medical device?
No, strictly speaking by definition of MDD 93/42/EEC and 2007/47/EEC, Hero is not a medical device. It falls into a similar class of device as exercise heart-rate monitors (the kind that has a strap around your chest and transmits your heart rate to a watch); all this device is used for is to monitor breathing movement. It should not be used to diagnose, monitor, treat or alleviate a disease, injury or handicap. Nor should it be used to investigate (i.e. find the cause of) a physiological process (i.e. breathing).

6. How does Hero transmit the sound?
Snuza Movement Monitors don’t transmit sound. In fact, they don’t transmit any radio frequency at all (and hence there’s no danger of radio-frequency radiation). The only thing that emanates from Hero is sound (from the alarm) and light (from the indicator LEDs), making it ultra-safe for use on babies. If you would like to transmit sound to another room in the house, we recommend that you use Hero in conjunction with an Audio or Audio/Video monitor, such as Snuza Video. This way, if Hero alarms, you will be sure to hear it over the Audio/Video monitor.

7. Why use a Snuza Hero?
Although there are already baby movement monitors on the market which alert parents or caregivers to any cessation in movement they do not offer mobility as they rely either on the availability of electricity, or on the baby being at home in its cot where the under-mattress monitors need to be placed. Snuza Hero monitors are fully mobile and can be used wherever baby is, eg in a carseat, stroller, pram, carrycot, etc.

8. How does a Snuza Hero work?
Once Hero is clipped onto the nappy and activated, it will immediately start monitoring movement. If your baby were to stop all movement for 15 seconds, Hero will emit a safe, vibrating stimulus to gently rouse the baby. If after 5 more seconds, movement has not resumed, Hero will sound an alarm to alert you to act.

9. How easy is it to use Hero?
Very easy. Just clip it onto your baby’s nappy and turn it on. This shouldn’t take more than a few seconds.

10. Can I use Hero with reusable/fabric nappies?
Yes. If the fabric nappies are too thick for attachment, Hero should be securely attached to the nappy cover or waterproof pants – ensure a snug fit so that Hero maintains body contact. You may need to position Hero slightly to the side to ensure maximum contact.

11. Can Hero be used with a baby that sleeps on his tummy?
Hero relies on movement in the area where the sensor is located. Usually, when sleeping on its back (as recommended by the World Health Organisation to reduce the risk of SIDS) the sensor contained in the blue tip of Hero will be located as close to the tummy as possible where the most breathing movement of a baby occurs. If baby sleeps on its tummy, then the tummy movement is reduced, simply because of the restriction of the mattress. More movement occurs at the sides than when sleeping on the back. By trial you will need to position Hero away from the tummy, because that will cause discomfort, towards the side where you can visibly see movement. There is a greater possibility of false alarms occurring in this case, but after a few trials you will find a position to attach Hero that will provide successful monitoring of breathing movement. Please also be aware that if your baby sleeps on his tummy then any alarm sound may be muffled, and the use of a sound monitor may be required.

12. Is Hero safe?
Absolutely! Baby’s safety is paramount. Hero utilises an ultra-low voltage (3.6V) battery, emits no radiation and has no side effects.

14. Can Hero travel?
Yes, this is what separates it from other monitors. As Hero requires no mains power, wires or cords (it is battery operated) it can go anywhere and everywhere you and your baby go. Please note:- Hero monitors detect all movement, including those from external sources such as a moving vehicle, pram, etc. Hero should only be relied upon when there is NO external movement present, ie when the vehicle, pram, carrycot, etc is stationery.

15. Until what age is Hero recommended?
Biosentronics recommends that Hero be used until the age of 1 year.

16. Can Hero be used again?
Yes, absolutely. If the battery fails or the power is depleted, it can easily be replaced by purchasing a battery.

Get peace of mind with snuza baby monitors.

There are no reviews yet.

Be the first to review “Snuza Hero” Cancel reply