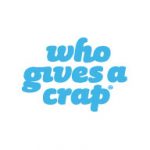 FREE PICK UP IN CANBERRA

Haven’t heard of Who Gives a Crap?

Here’s some words from them:

First of all, it’s funny. Lots of room for toilet jokes, which we love. But really, we love toilet paper because for us, it’s our way of making a difference. We started Who Gives A Crap when we learnt that 2.4 billion people don’t have access to a toilet (now 2 billion – yay for progress!). That’s roughly 40% of the global population and means that around 289,000 children under five die every year from diarrhoeal diseases caused by poor water and sanitation. That’s almost 800 children per day, or one child every two minutes. We thought that was pretty crap. So in July 2012, Simon, Jehan and Danny launched Who Gives A Crap with a crowdfunding campaign on IndieGoGo. Simon sat on a toilet in our draughty warehouse and refused to move until we had raised enough pre-orders to start production. 50 hours and one cold bottom later, we’d raised over $50,000 (see the video here!) We delivered our first product in March 2013 and have been thrilled to keep growing ever since. Not just because our toilet paper is gracing bathrooms across the country but also because we donate 50% of our profits to help build toilets and improve sanitation in the developing world. Though we’re still growing, and now make more than just toilet paper, we always want to stay true to our roots: toilet humor and making the world a better place.

Who gives a crap

Toilet paper that's as good for the environment as it is for your bottom. Ethically produced with profits going to other countries to give everyone access to a toilet.

There are no reviews yet.